(From £750) Soulfire are a knockout band delivering a punchy set full of the biggest rock/pop/soul/funk get-on-the-floor classics!
'What a fantastic band!' Allan Williams (The Beatles 1st manager)
Enquire now 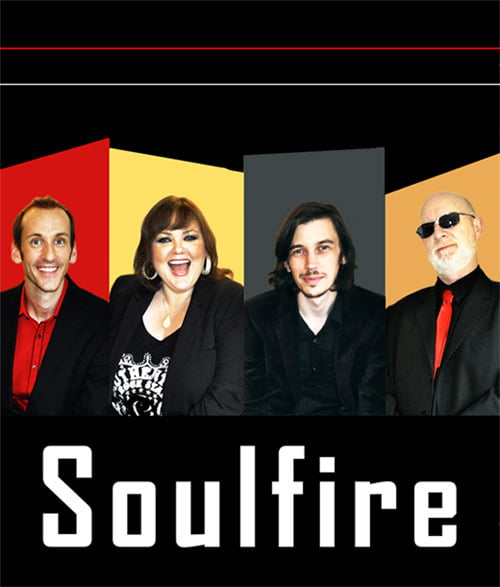 The vital ingredient that makes SOULFIRE (Soul Band North West) shine is their talent: being highly trained, professional musicians, they bring a wealth of professionalism and performing experience to your event that is second to none!

Lead vocalist Deborah’s rich and sassy soul voice blended with the band’s punchy rhythms are a recipe for the perfect evening. SOULFIRE  (Soul Band North West) are one of our premier Soul Band, and travel all over the UK/internationally.

Richard (Guitarist of Soulfire) is one of the most respected guitarists of his generation. Noted for his virtuosic performance of lead, rhythm and bass on the guitar simultaneously he has taken SOULFIRE (Soul Band North West) around the world, appearing with jazz funk mammoths Courtney Pine and Dennis Rollins from Jamiroquai along the way.

A consummate professional, as leader of Soulfire they have been asked to appear at the most prestigious venues, including Sir Terence Conran’s Bluebird Club in Chelsea, The Hi-Fi and Liverpool’s renowned Cavern Club, performing classic songs from 60’s-today and original songs. SOULFIRE (Soul Band North West) were the band of choice for very first wedding on BBC 2 series ‘Jimmy’s Farm’, Channel 4 show ‘High School Dance’ and have also been the subject of a prestigious BBC jazz feature.

Being full-time, professional musicians, all of the SOULFIRE members as part of their careers have either performed, written, and/or recorded with some of the world’s most varied artists: Jools Holland, Fontella Bass, Lionel Ritchie, The Stranglers, Corinne Bailey Rae, Cherry Ghost, Lily Allen, HURTS, The Ting Tings, The Christians, The Cinematic Orchestra, The Coral, M People, John Squire (Stone Roses), The Average White Band, Embrace, Sam Brown and Elvis Costello include a few.

SOULFIRE (Soul Band North West) have always knocked out the competition wherever they go: When Richard was aged just 20 his staggering talent won him places in the finals of both the ‘Young Jazz Musician of the Year’ show (hosted by Jools Holland) and beat 60,000 hopefuls to the ‘Acoustic Guitarist of the Year’ finals at Wembley. No stranger to the charts, the guys from Soulfire have also written/performed on many chart hits including both UK and International number 1 singles and top ten albums.

All members of this band studied music not only through university, but have invested many years into honing their skills to precision. Deborah (vocals) studied music at the University of Liverpool and graduated with an award-winning Honours degree. She is an avid fan of jazz and soul music; influences include Ella Fitzgerald, Peggy Lee and Dusty Springfield, amongst others. Deborah has entertained countless audiences as a professional performer for many years, as a singer, writer, actress and musical director. With SOULFIRE (Soul Band North West) she has performed at illustrious five-star venues all over the UK and abroad, including appearances on the BBC and E4 television channels, and is very proud to have sung at the late, great, Sir Norman Wisdom’s 90th birthday party.

At just 17 years old Richard (guitars) was one of the first ever students to enter the famous LIPA Performing Arts School, his induction appearing on live television as part of a ‘Ferry Across the Mersey’ special with Gerry and the Pacemakers. After receiving Masterclasses from Mark Knopfler (Dire Straits), Joan Armatrading, Steve Morse (Deep Purple), Yngwie Malmsteen and José Feliciano, Richard had the honour of being awarded his degree by Sir Paul McCartney.

Richard was promptly signed to Pulver Records and released his first European Top 40 Hit with his own Jazz/Blues outfit. Recently Richard’s musical career has involved performing and recording all guitars (rock/dance, balearic and classical) for Superstar DJ Matt Dareys’ singles and albums: this has propelled them into the charts many times, culminating in millions of Youtube hits and a coveted Beatport Chart Number 1 hit single not just once, but 3 times!

Soulfire (Soul Band North West) have a fantastic setlist crammed full of your favourite hits from all decades, and you can choose your first dance song!:

Classics for All Ages:

Songs to Sing Along To:

“Hi Atrium, I just thought I’d let you know that we have had an amazing amount of feedback from the guests who attended our very first Jimmy’s Farm wedding.

The night was amazing and the band just blew the crowd away! All of the staff have insisted that we book your guys and gal for our future barn bashes and I will of course be the recommending them to everybody.

“I would be really grateful if you could pass on my thanks to SOULFIRE (Soul Band North West) for being absolutely amazing at our wedding.

I can honestly say they are the best live function band I’ve ever heard. Their versions of Hava Nagila and Simon Tov were brilliant and got everyone on the dancefloor – where we all stayed all night until they played the last note!

They were fun, professional and just a fantastic band all round. They were definitely the best part of the wedding reception and both during the evening and since then, our guests have commented about how great they were and how they made the evening.

I’ve already recommended them to loads of friends and I look forward to hearing them play again soon. Kind regards, Kira.”

“Thank you so much to Atrium for providing such an excellent band to play at our wedding ceremony and reception on 12th June.

All aspects of your service have exceeded any expectations we may have had. From your prompt response to our requests/queries through to the follow up on your service, both yourself and the band have already been deeply recommended to our family and friends.

My only regret is that we hadn’t booked the band for a longer period of time, as we didn’t want their music to end (I found myself singing along to most of the songs)! Everyone who attended the day has commented, not only on the quality of music but also their friendly disposition.

I have a photo of my cousin proudly holding the saxophone, not something I would expect most bands to allow. I’ll be looking out for their next gig! Thanks once again for all your assistance in our Big Day.”

“We want to thank Richard for the lovely music he played for our Wedding service, and also the band at the night time reception, a lot of the guests have since asked about yourselves and said it was such a good atmosphere, they have never been to a wedding like it!”

“An outstanding Guitarist and performer”

“My wedding was on Saturday 24th July and Soulfire (Soul Band North West) performed at my night ‘do’, can I just say how excellent they were.

They arrived without any fuss at all and got straight into the set which had me up dancing straight away!

All the other guests followed and I was bombarded by many of the guests telling me how fantastic the band was. Thanks for making my wedding a memorable one…. they will come highly recommended.”

“Please could you pass on all our thanks to Richard for his performance at our wedding on Sat 23rd October at Hoole Hall.

The day was fantastic, the ceremony was made all that more special with the music, and everyone commented how lovely it was.

Once again, we would like to say thanks to Richard, we are sorry we didn’t get chance to thank him properly in person on the day, the day went so quick, but we have it all on video and hearing the tune again as we walk down the aisle, will always bring a tear to the eye. It was perfect. Thank you & best wishes.”

“Just a few lines to say a BIG thank you for making our wedding reception on 5th Sept so memorable.

The band were out of this world and all the guests were totally impressed and thoroughly enjoyed dancing to all the hits.

They were so professional and the skill of the musicians was incredible. They absolutely made our day, so thank you once again from the bottom of our hearts.”

“Please pass on our sincerest thanks and best wishes to the members of Soulfire (Soul Band North West) who played at our wedding on Sunday 9th in my parent’s garden.

They were absolutely fantastic – so much energy and personality. Each one an incredible musician and entertainer. The dance floor was full all night – and they even had my 80 year old uncle out there dancing!

Richard was so good with my 9 year old nephew who joined the band to play ‘Sunshine of Your Love’ which brought the house down and must have been a highlight of his life!

“Please can you let Richard and the band know that we and everyone at our wedding thought they were awesome!!! We were totally taken aback at just how good they were.

After speaking with Richard on the night I would also like to say he is a lovely chap! We will be recommending them to everyone!! Thanks”

“Hi Richard, I am sorry that this message is a bit late but things have been a little hectic here this week. I wanted to express my thanks and appreciation to you and the other members of the band for a superb performance in Watford last Friday.

We were all impressed by your musicianship and your repertoire. We liked your flexibility and co-operative approach to the somewhat erratic arrangements during the course of the evening.

All our guests commented on how good you were and how sympathetic you were to the needs of the audience. I shall certainly pass on your details to friends planning a similar event. Many thanks and my best wishes for the future. Regards, Dennis.”

“Hi Richard, apologies that its taken me such a long time to get back to you, we just wanted to drop you a quick note to say thanks so much for your performance at our wedding in Appletreewick on 17th October.

We thought you were brilliant, as did many of our guests, judging by all the positive comments we got afterwards. The set you played was great for getting everyone up dancing. The band were the icing on the cake of a perfect day, so thanks again.”

“Anna and I would just like to say thank you for helping to make our day so special.

Both the live sets and the DJ sets were exceptional, we had people coming up to us all evening complementing the band and people are still saying how good the music and musicianship was even now, a month later!

“I would be very grateful if you pass on our thanks to Richard and the rest of Soulfire (Soul Band North West) who played at our wedding on 26th June. We knew we were in for a treat when we arrived at the venue and Richard was playing solo guitar to entertain our guests during a drinks reception – absolutely incredible – a serious talent.

Then for the evening reception – we always wanted our guests to be wanting more when the evening came to an end and that’s exactly what happened. The battle of the band between the guitar at the sax was out of this world. Thanks to all for helping make our day so special”

“Soulfire played for my granddaughters 18th Birthday. We were all very pleased with their performance which contributed to an excellent night for all our guests and would not hesitate to book again for any further functions!”